The girl with the curly hair woke up that day,
Got dressed, ate some breakfast, then out and away
The school hat was perched on the top of her head
And Derek was left half-asleep in the bed.

The monkey woke up when he heard the door close
And he yawned and he stretched and he wrinkled his nose
And he pushed back the covers and climbed down to see
That everything was quite where it ought to be.

But this day was different – there was something not right.
As he lined up the toys they were twitchy with fright.
Bertie and Martin and Gordon and Myrtle
All tried to hide under the shell of the turtle.
Clarence and Polo were galloping fast
Like it was a race and they couldn’t be last.
The rag dolls both clambered up onto a shelf
Like they had to run for the good of their health.

He turned to his wife and his son for their help
But they looked at him and they gave out a yelp:
Little Derek looked at Dorothy then they both cried.
She took him to the cupboard and put him inside
Then she turned to Derek and said, through her sniffle,
“It could be very bad or it could just be piffle
But go see Old Bunny, he’ll know what to do.”
Then she ran and she hid by the side of the loo.

Derek was shocked but he did what she said
Though worry went round and round his monkey head.
He didn’t know why they all found him so scary
He wondered if suddenly he’d become hairy
So he went to the mirror and it became clear
Just why the toys acted with horror and fear.
His mouth had just gone, disappeared in the night,
Leaving just two black dots that didn’t look right.
His smile was now just a dent in his fur.
The curly-haired girl! He must fix this for her! 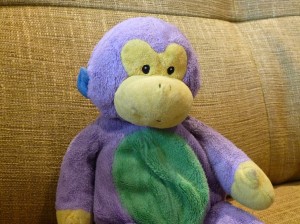 Old Bunny was Daddy’s much battered old toy
A floppy-eared cuddly toy for a boy.
Since Daddy grew up, Bunny lived in a drawer –
It wasn’t that he didn’t love Bunny any more
But grown-ups love toys in a different way
And certainly don’t need to see them each day.
Derek used to visit as often as he could
But not as often as he thought maybe he should
He’d climb up the chest of drawers right to the top
And then with a step and a kick and a hop
He’d jump and nudge open the drawer with his foot
And crash-land right next to where Bunny was put.
But this time he didn’t want just a nice chat
To talk about this or to talk about that
Or discuss which toys were now wearing a hat
Or wonder why so few toys looked like a rat.

As soon as he landed, Bunny knew why he’d come
And he said, “Oh Derek, now, don’t be so glum
The toymaker can put your mouth right back on
And do it so well you’d not know it had gone.”

But Derek did not look too happy to hear
What Bunny has whispered into his left ear
And Bunny knew that there was more he should say
Before Derek could be off and be on his way.

“Oh Derek – do you want to know where it went?
Why your mouth has gone, and where it was sent?
But all I can tell you is it wore away
From cuddles and kisses on day after day.
The love you received from the curly-haired girl
Has made your smile’s stitching come all awhirl.
These things are so common – look my leg is thin
Where stuffing came through so now stitches pull in.
You haven’t been punished, you’ve done nothing wrong
So cheer up, young monkey and go run along.”

So Derek jumped down and, without a goodbye,
Jumped up to the window (two stories high).
A twist of the catch and a shove and a push
And out he fell into a soft leafy bush.
The rain wasn’t falling, the wind didn’t blow
All would have been fine if he’d known where to go.
But off he ran, hidden by hedges and cars
He might not know where, but he’s getting there fast.
He felt a pull deep in his stuffing, he knew
That something was leading him, just not where to.

Late one night, in the dark, long, long ago
When it was so cold and beginning to snow
And Derek was half-made, part-sewn and not stuffed
Some fairies flew round and they huffed and they puffed
And their magic dust got all the way deep inside
And gave him such power and much more beside.
But even though it did so much while he travelled
It hadn’t helped when his mouth had just unravelled.
So it all came down to a matter of trust
And Derek felt trust for his magical dust.
The curly-haired girl wouldn’t have met him without it
He had to keep going, there was no doubt about it.
But afternoon turned into evening and night
And Derek was lost, turning left, turning right
His trust in his dust was fighting his fright
When he saw a house with a welcoming light
And thought, “This is it! It’s the house! Warm and bright!
The toymaker can put my mouth back on tight!”

He climbed up a hedge onto the window sill
And stood watching carefully, keeping quite still
An old lady sat with a girl on her knee
And they were chit-chatting quite comfortably.
So Derek pressed his ear against the glass
And was just in time to hear the girl ask
“Grandma, what are all those lines on your face?
Round your mouth and your eyes and all over the place?”
And Grandma smiled at her and said, “Well, my dear,
I get more and more of them every year.
They’re from all the smiles and the love I have had
From you and my little boy who’s now your dad.
I give love to you and you give it to me
And over time that turns to lines you can see.
The smiling I’ve seen and the smiling I’ve done
Can keep me as warm as the afternoon sun.”

And the girl hugged her grandma and kissed her and said,
“Will my love put more lines all over your head?”
And grandma laughed and said, “Not under my hair –
As far as I know since I’ve never looked there.
And both of them laughed and they hugged and they kissed
And suddenly Derek felt he was being missed.
The curly-haired girl would be back from the school
And he had gone out, what a daft purple fool!

And he hadn’t even gone to the right place
So he still didn’t have a mouth back on his face.
But something he’d heard gave him a big idea –
There was no need to worry and no need to fear.
Then a sound came out through the glass into his ear –
Were those seven chimes from the clock he could hear?!

He leapt to the ground and ran off down the street
Though the ground was so cold and so hard on his feet.
Like before he just felt that he knew where to go
But it was quite hard to say why that was so.
He couldn’t be late – that would be just too terrible
For him to miss bedtime would be quite unbearable.

Meanwhile back at home with no monkey in sight
And Myrtle about to step in for the night
The curly-haired girl was upset and perplexed –
If Derek had vanished then who would go next?
Her mother said he would be sure to turn up
And there was some water in the bedside cup
And what bedtime story would she like tonight?
And quickly, lie down, and she’ll tuck her in tight.

Myrtle the small brown bear hoped he would do
As something to snuggle and cuddle up to
But really he would have liked Derek’s advice
On how to make sure that the dreams were all nice.

Meanwhile, outside, Derek turned left and then right
And there was his home, just by that street light.
He suddenly stopped and hid behind a bin
While he thought and he thought about how to get in.
Then suddenly a blue car parked by the kerb
And Daddy got out! This was really superb!
Derek jumped in the carrier bag in Daddy’s hand
And rode all the way upstairs – this was quite grand!
He sneaked out once Daddy had carried him inside.
The curly-haired girl turned over and sighed
As Derek climbed back up and into the bed.
He cuddled her and she stroked his purple head.

And Derek told his tale to her while she was sleeping
About where he’d gone with his running and leaping
And about what he’d learnt when he stood by the window
Before he noticed it was time that he should go.
He told her the tale of the lines on the face
And how they weren’t ever a shame or disgrace
But showed all the love that that person had felt
And wrinkles from times when her heart seemed to melt.
And toys can’t get lines but they can still get worn
When cuddled and squeezed from the day someone’s born.
But they are still the same soft toy in the end
The creature that’s the child’s first, best, toy friend.

As the sun rose over a beautiful day
The curly-haired girl woke and she stretched where she lay
And suddenly saw that her Derek was there,
His little face covered in her curly hair.
She hugged him and squeezed him and kissed him then saw
His mouth had gone from where it had been before.

She ran to her parents and said to them, “Look!
My Derek! He’s back, but his mouth has been took!
I mean it’s been taken, it’s gone, run away
And I don’t think it will come back another day.
But that’s just from all of the cuddles he’s had
It’s not a disaster or even slightly bad.
It just comes from how much I love him,” she said.
And her parents smiled up at her from her bed.
“But,” she continued, “just look at his feet!
They’re filthy like he’s been out running in the street.”